Directive to close down crusher industry of Sarangghat

The District Coordination Committee Tanahun has directed the closure of the illegal stone crusher industry. The Committee has directed the shutdown of Namuna Grid and Crusher Industry being operated at Bandipur rural municipality-6, Sarangghat of the district.

Though the District Coordination Committee had ordered to shut the crusher industry, it was not implemented earlier. A meeting presided over by committee chief Shantiraman Wagle took the decision to close down the operation of the industry. The directive was issued to the industry to close down its operation for failing to take prior approval for environmental impact study as per the work procedure issued by the Gandaki State.

The committee has decided to send a letter to Bandipur municipality to ban the operation of the crusher industry till due diligence is fulfilled in regard to the environmental impact assessment. Likewise, the committee has ordered closing the excavation and illegal transaction of pebbles, gravels and sand underway in Byas municipality area without obtaining contractual approval for the same. As the excavation was being carried out without completing the due process the committee decided to immediately ban the illegal act.

Ban on fair and jatra during festival 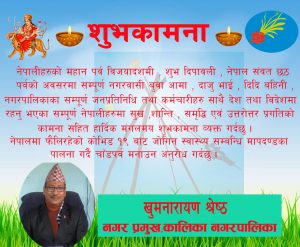